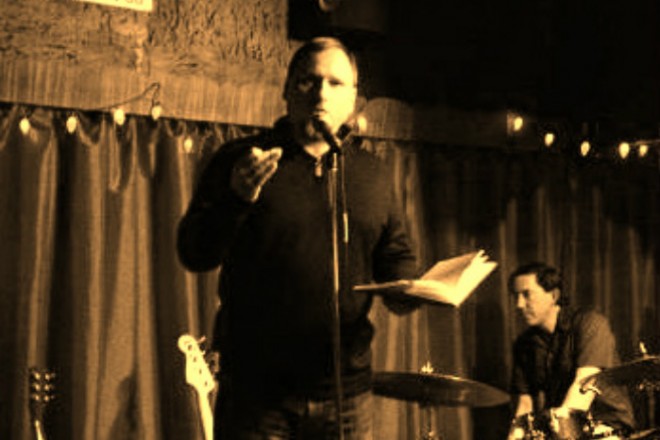 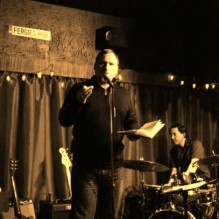 Check back regularly for updates on upcoming appearances. If you would like to contact Ernest Hilbert about a reading, you may do so by using the contact page on this site.

Ernest Hilbert’s book Storm Swimmer was selected as winner of the 2022 Vassar Miller Prize by Rowan Ricardo Phillips. The book will be published by UNT Press in April 2023. Tollund Press of Essex County, Massachusetts, issued a second broadside of Hilbert’s work, “Pelagic,” with the image of a cresting wave created by Paris-based Chilean painter Franco Salas-Borquez, six sealed in bottles, three for sale and three placed into the Gulf Stream, along with 54 unbottled copies. Hilbert’s poem “Endless Mountains” appeared in The Spectator World; “In Paradisum” in Philadelphia Stories; “Vertebrate” in 32 Poems; “Moon Garden” and “December Issue” in The Hudson Review; “Little Cause” and “Alchemericana” in THINK; “Wintergreen Barberry” and “Mineral Springs Trail” in Literary Matters; “Salvaging” and “My Autocorrect Always Turns Poems into Problems” in The Bennington Review; “Voltage Crackles at the Edge,” “The Study,” and “Bound Demons” in The Dark Horse; “Funerary” and “Great Egret Over Lake Luxembourg” in Trinity House Review; “Cape Charles” in ONE ART: A Journal of Poetry; “Is This Thing On?” in The Hopkins Review.

2021 Newburyport Literary Festival
Ernest Hilbert with Martha Collins
Saturday, April 24th, 2PM EST
“Ernest Hilbert has dared to wear the mantle of the public poet. Critics often compare Hilbert to Robert Lowell, not only because he allows his personal demons a say in his poetry, but also because, in many of his poems, his intended audience is not one reader or a small group of aficionados, but our nation, these hardly-united States—whether or not our nation is willing to listen.” Register here.

2021 Newburyport Literary Festival Opening Ceremony
Friday, April 23rd, at 6PM EST
Ernest Hilbert in conversation with Deborah Warren, author of the The Size of Happiness, Zero Meridian, Dream with Flowers and Bowl of Fruit, and the forthcoming Connoisseurs of Worms.

Ernest Hilbert’s poems “The Demon,” “The Knife,” and “Above the Salt Springs” appeared in The Raintown Review, Number 1, New Series. The issue also contained a substantial review of his book Last One Out by New York critic Wendy Sloan. Hilbert’s poem “Lodge” appeared in June issue of The North American Anglican. His 2013 spoken word album Elegies & Laments was featured on the Best American Poetry’s “Poetry on Vinyl” series. Tollund Press of Essex County, Massachusetts, issued a letterpress signed-limited broadside of Hilbert’s poem “Last Rites” with art by his son, Ian. Hilbert’s blank sonnet “Appeal” was selected as the Laureates’ Choice winner in the 2021 Maria W. Faust Sonnet Contest, which is affiliated with the Great River Shakespeare Festival in Minnesota. Hilbert’s review of Richard Ovenden’s Burning the Books: A History of the Deliberate Destruction of Knowledge appeared in the February 12th edition of the Wall Street Journal. His review of The Bookseller of Florence: The Story of the Manuscripts That Illuminated the Renaissance appeared in the April 23rd issue of the same newspaper. On March 18th, Hilbert’s NFT poem “Riddle Me” was issued for sale at Opensea, a peer-to-peer marketplace for rare digital items and crypto collectibles housed at the Hunter College MFA program in New York City. It sold to a private collector.

Ernest Hilbert’s poems “The Inlet” and “Monster-Mania Con 44” appeared in issue 140 of Red Fez magazine. His poem “Human Interest” appeared on the Best American Poetry website. Hilbert’s poem “Drink Me” appeared in The Moth. His poem “Deep Shade” appeared in issue 13:1 of Literary Matters, at the Association of Literary Scholars, Critics, and Writers. His poems “Union Lake” and “Remains” appear in Edition IV: Fall 2020 of Bowery Gothic magazine. His poems “Spolia Opima,” “Crypt,” and “Apollinaris, Medicus Titi Imperatoris hic Cacavit Bene” appeared in the October 2020 issue of Cassandra Voices. Hilbert was invited to be the “Celebrity Judge” for the 2021 Montgomery County Poet Laureate competition. A. E. Stallings reviewed Hilbert’s fourth book, Last One Out, in B O D Y, a Prague-based literary magazine. Last One Out was also reviewed in The Hopkins Review at Johns Hopkins University, Volume 13, Number 2, Spring 2020. Hilbert’s poems “Laurel Hill,” “EL CONQUISTADOR,” and “Rondel” appear in the new issue of Think: A Journal of Poetry, Fiction, and Essays, Summer/Fall 2020, Volume 10.2. His poem “We Regret” appeared in the Seneca Review‘s 50th-Anniversary “Anxiety” issue.

All scheduled public appearances this spring and summer have been canceled due to the Covid-19 Pandemic. In other news, Hilbert’s review of Kathy Peiss’s book Information Hunters: When Librarians, Soldiers, and Spies Banded Together in World War II Europe appeared in the Wall Street Journal. His poems “Scream Queen” and “Stronghold” appeared in issue 27 of Smartish Pace magazine. A number of students around the country chose to recite Ernest Hilbert’s poem “Domestic Situation” this year for the Poetry Out Loud competition, including Victoria Abate of Laconia High School, New Hampshire; Taelyce Depina of St. Patrick Academy, Rhode Island; and Jordan Sweenie of Groton-Dunstable Regional High School in Groton, Massachussets, all of whom won their regional competitions with the poem. Congratulations! The website The Wolf Eel features a voice recording by the site’s host of Hilbert’s poem “Dredge,” which appeared in Two Weeks: A Digital Anthology of Contemporary Poetry and his second collection, All of You on the Good Earth. “Domestic Situation” was also featured on North State Public Radio, read by radio personality Anthony Peyton Porter. The magazine Fine Books & Collections (18.3, Summer 2020) contains my profile of Kevin Young, poet, essayist, anthologist, book collector, professor, scholar, curator, and Director of the Schomburg Center for Research in Black Culture in New York City.

Ernest Hilbert Reads Robert Burns for Burns Night
Saturday, January 25th, 6PM SOLD OUT
Rosenbach Museum & Library, Philadelphia
“Raise a glass to the Bard of Ayrshire, Robert Burns, with an evening of raucous readings of selected poems (including Tam O’Shanter) and songs performed by Celtic music duo The Kennedys. We’ll have a few traditional Scottish treats, and Burns books from our collection will be on display.”

My poem “Last Rites” appears in the latest issue of The Hudson Review, Autumn 2019, Volume LXXII, No. 3. My poems “Scream Queen” and “Stronghold” will appear soon in Smartish Pace. All three are part of a new book I’m working on called Storm Swimmer. My full-page review “From Genocide to Justice,” about Heghnar Zeitlian Watenpaugh’s book The Missing Pages: The Modern Life of a Medieval Manuscript From Genocide to Justice, appeared in the November 23rd Wall Street Journal Holiday Books special section. My feature profile of Dana Gioia’s book collection appeared in the November issue of Fine Books & Collections. I reviewed Scottish poet Kathleen Jamie’s new book of essays, Surfacing, in The Washington Post. Composer Christopher LaRosa, who has in the past set my poems “Nights of 1998” and “Kite,” is at work on a musical setting of my poem “Chelsea Hotel,” from Last One Out, for baritone and string quartet. Last One Out was reviewed at Literary Matters —”in Last One Out, Hilbert—as with many poets writing at the height of their powers—conveys a sense that we are being told a single narrative of human existence, that each poem is a small part of a larger mosaic, being revealed to us slowly”—and in The Sheila Variations, “Hilbert is haunted by what used to be here, either 20 years ago or 1,500 years ago . . . Hilbert never just sees ‘Now.'”

Two stanzas of my poem “Mars Ultor,” which appeared in the Best American Poetry 2018 anthology (and will appear in Last One Out, March 2019), are cited by book critic Michael Dirda in his Washington Post review of the anthology. My poem “Amusements” appears in the new issue of Plume alongside new poems by Billy Collins, Stephanie Burt, Marilyn Kallet, Adam Tavel, and others. The issue also features “The Poets Speak,” in which we offer commentary on the poems. My poem “Visitations” appears in the first print annual of Cassandra Voices. A 2009 recording of my poem “The Pessimist Prepares for What May Well Be His Last Winter” from my first book, Sixty Sonnets, aired on December 23rd, 2018, on WXPN 88.5 FM Philadelphia’s Sleepy Hollow radio program.

My poem “Mars Ultor” has been selected for inclusion in Best American Poetry 2018, which will be published in hardcover and trade paper by Scribner in September. I’ve reviewed a few books for The Washington Post newspaper. You can read them here, and here, and here. My poem “Nights of 1998,” from All of You on the Good Earth, has been set to music by composer Christopher LaRosa for voice and sinfonietta. It was performed in March, 2018. Click here to hear and view the performance. “Nights of 1998” will be performed again in Mexico City by UNAM (Universidad Nacional Autónoma de México) on May 29th.

A recording of my poem “Haunts” aired on WHYY FM, Philadelphia’s NPR Station, 90.9 MHz, on April 24th, 2018 as part of a National Poetry Month feature on Morning Edition, hosted by Jennifer Lynn. It’s a series on Philadelphia neighborhoods. I imagine the cartoonist Charles Addams, who lived in my neighborhood, drawing me as one of his bizarre characters looking out of my window after a rain storm. The poem is slated for my fourth book, Last One Out. You can visit Morning Edition’s archive to read the poems in the episode: “Poetry Conveys Sense of Philadelphia Community.” My poem “Air & Water” appears in the May issue of The New Criterion.

Ernest Hilbert in Conversation at the Rosenbach

The author of the essay “Austen’s Ring and Shelley’s Heart: Our Fascination with Literary Relics” will talk about rare book collectors and their attraction to objects once owned by their favorite authors, including Jane Austen’s ring, Virginia Woolf’s desk, Tolkien’s academic gown, Hemingway’s moccasins, Jack Kerouac’s typewriter, and J.K. Rowling’s chair.

A brief update of some summer 2017 activities. My review of Willard Spiegelman’s essay collection Senior Moments: Looking Back, Looking Ahead appeared in The Hopkins Review, and my review of Abigail Williams’ The Social Life of Books: Reading Together in the 18th-Century Home appeared in The Washington Post. My poems “House and Home” and “Campo Santo” appeared in Connotation Press: An Online Artifact, and my poem “Seasonal Drinking” appeared in Modern Drunkard magazine. I was interviewed at length for the Schuylkill Valley Journal. My review of Michael Dirda’s essay collection Browsings: A Year of Reading, Collecting, and Living with Books also appeared in The Hopkins Review. Finally, my poem “Independence Day” appeared in the July issue of The Yale Review. Otherwise, it’s been a quiet summer, for which I am most grateful.

Conundrum and ivebeenreadinglately.com both select All of You on the Good Earth as poetry book of the year

You Were Born to Feel a Way You Don’t Have a Word For
Ernest Hilbert with Timothy Donnelly and Matthew Zapruder
April 12th, 2011
Robin’s Books, Philadelphia 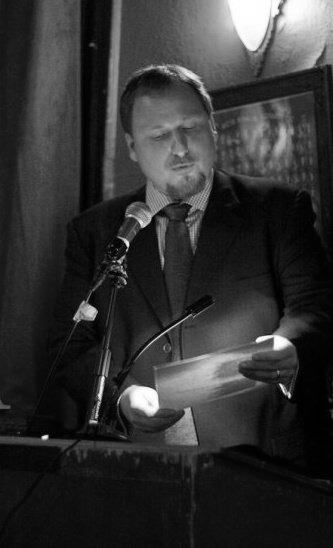 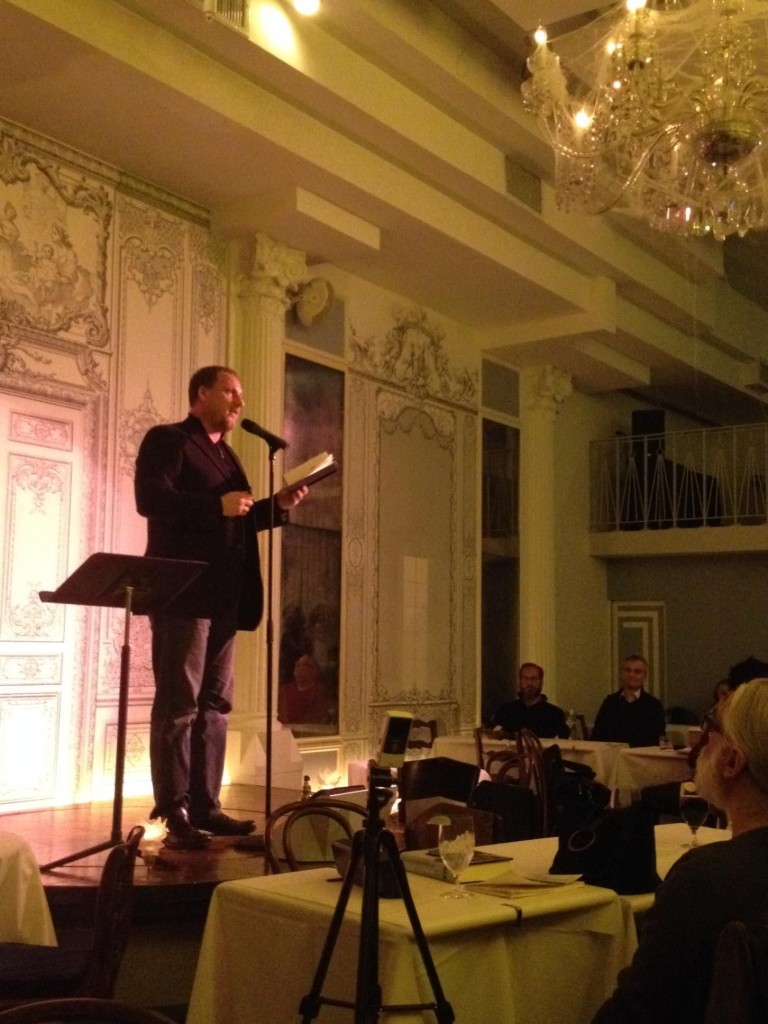 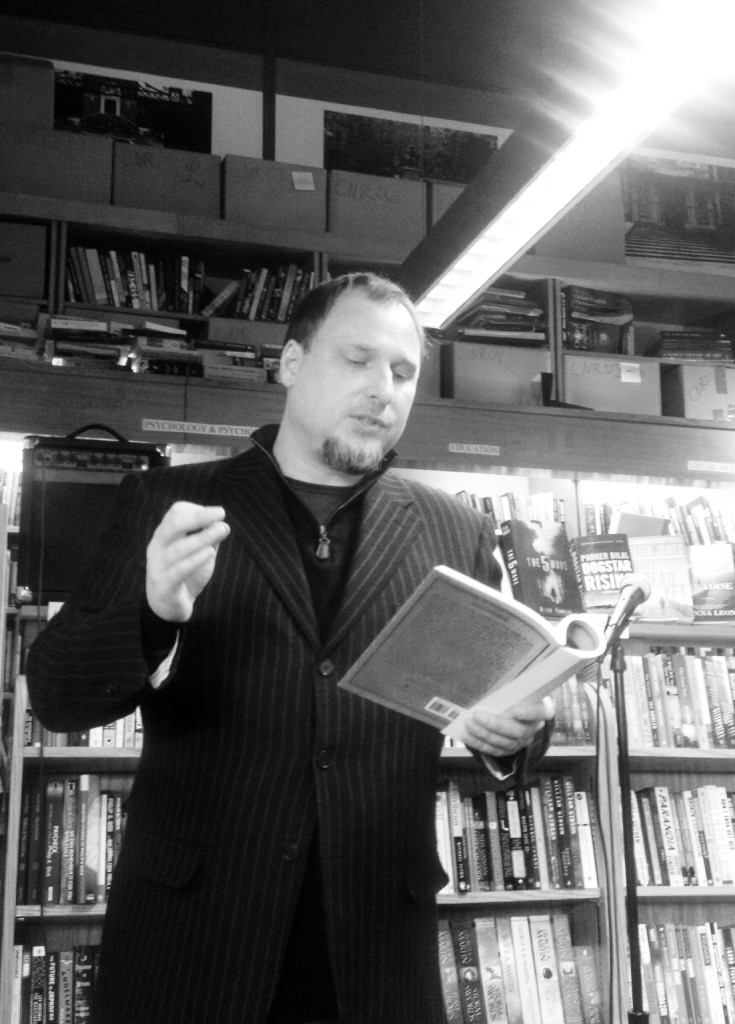